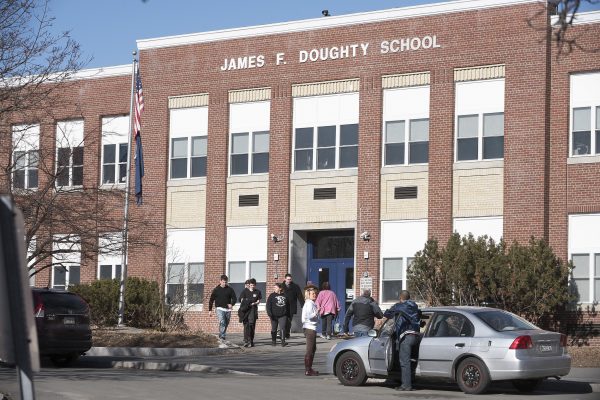 A seventh-grade teacher at Bangor’s James F. Doughty School became the target of online vitriol over the holiday weekend after a parent shared a video lesson she delivered about racial privilege and identity to a pro-Trump Facebook group.

The incident showed the polarized reaction that’s possible as Bangor teachers start delivering diversity and equity education to students this school year as one of a number of actions the school system promised to address racism in the city’s schools.

The parent’s sharing of the video to the Facebook group — a violation of school department policy — and the “hateful comments and vitriol targeted at the teacher have unsettled many,” Superintendent Betsy Webb said Monday in an email to parents. She called for “support and kindness” as the city’s teachers deliver the new training and start a school year during which they’re teaching both online and in person.

Last week, parent Bill Kimball recorded part of the teacher’s lesson as she discussed race- and gender-based privilege and posted it to a Facebook page for Maine Trump supporters, calling it “unbelievable.”

In the shared video clip, the teacher talked to students about how race and gender shape their identities and their treatment in society. As a white woman, the teacher explained, she does not face racial discrimination but has faced sexism.

“The fact that my race is white is part of my privileged identity,” she said. “Race is not something that gets in the way of me getting a job or puts me in danger, whereas my gender being female is something I have to think about and might be one of my more targeted identities.”

Before Kimball removed it from the pro-Trump Facebook page, the video had been shared about 200 times and several commenters had called for the teacher to be fired.

Over the weekend, a number of Bangor parents wrote to the Bangor School Committee expressing their support for the teacher and for educating students about race and privilege, with some sharing their messages on social media.

Webb did not respond to questions Tuesday about the incident and comments the school department received in response. Attempts to reach the teacher through the Doughty School were unsuccessful.

Kimball didn’t respond to requests for comment. However, his wife, Libby Kimball, posted a statement about the sharing of the video to the Facebook page of her Bangor business, Cake Mama. That page, including the statement, has since been removed or made private.

“My husband and I were upset about what we thought was an inappropriate assignment in our daughter’s class. We stand by our beliefs about our children’s education,” Libby Kimball said. “We did not intend to cause this teacher any grief, and we apologize for any difficulties that the social media post has created.”

Bill Kimball also posted in the pro-Trump group that the “angry woke mob” was attacking his wife’s business and asked for support.

The Bangor School Department this summer hired the local organization Racial Equity and Justice to provide training on racial equity and diversity for staff. The training followed the Bangor Daily News’ June publication of a story about five Black students who shared their experiences of racism and discrimination at Bangor High School, and it was one of a number of steps the school department outlined in response.

“You have a place where people of color were routinely reporting a climate where racism was not really addressed,” said David Patrick of Racial Equity and Justice. “And now people are concerned that they’re taking action to address it.”

Parents and students who spoke with the BDN praised the teacher for being welcoming to all students.

Isaac Renshaw-Sirimoglu, a Bangor High School sophomore who had the teacher when he was in seventh grade, said she made sure he felt welcome in her class as the only Black student.

“As a white woman raising a Black son, I’ve seen how the world treats my son differently than how the world treats me. I’ve had very hard conversations with him about what he can and cannot do in society,” Jodi Renshaw, Isaac’s mom, said. “So if I have to explain that to him, then I think it’s absolutely imperative that white kids get explained the difference in privilege so they can help change it.”

Another Bangor parent, Kait Moriarty, reached out to Kimball on Saturday and had an exchange with him about the video. She also wrote to the school committee in support of the teacher and her lesson.

“It’s 100 percent something that every child should be learning, and she was not preaching. She was opening up a safe place for conversation,” said Moriarty, whose daughter is in third grade. “She did a great job.”