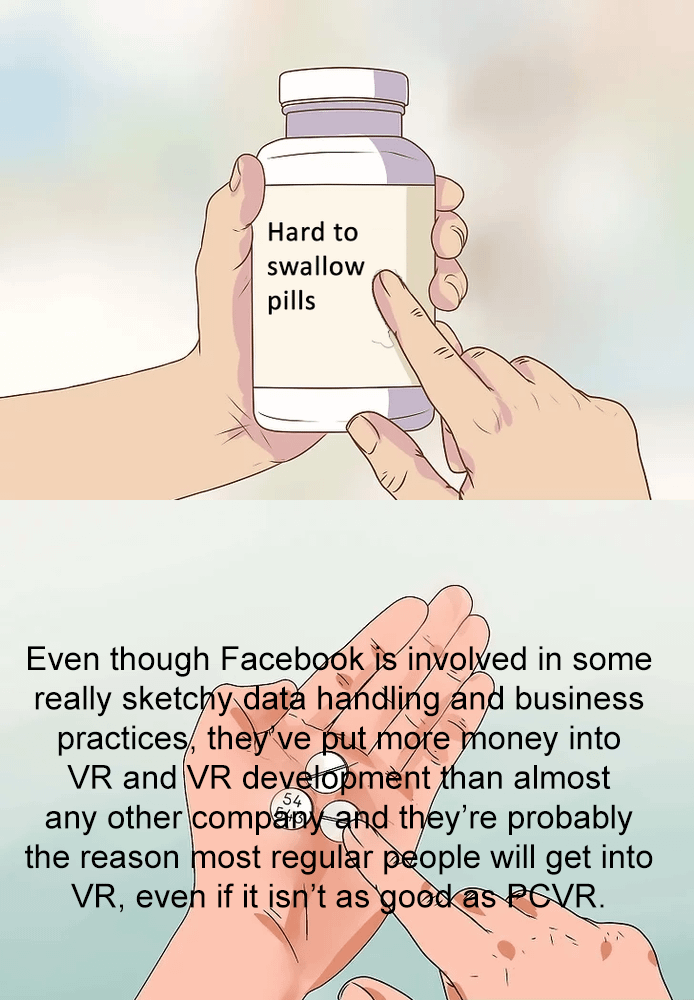 What Facebook has the potential of offering VR is just bringing it to consumers sooner. This was explicitly laid out by Zuck–in order for them to have any fighting chance at being competitive in the next big medium, they need to get there before anyone else. Otherwise this would absolutely stay as an enthusiast and enterprise thing for quite a while longer. It was that way with PCs, PC gaming and smartphones as well–they didn’t just flop because they couldn’t reach mass adoption in 4 years. No, the investments were simply proportional to the size of the market and the market expanded gradually alongside improvements in the technology. And, honestly, despite these massive investments, I’m still not convinced that this won’t also be the case for VR.

But never mistake this for a charity. FB is not “democratizing VR” or making it more accessible just for the good of humanity or whatever. In exchange for the possibility of getting VR and AR into the mass market earlier, what you risk having is Facebook controlling a sizeable portion of it. Whether or not that’s a problem for you depends on what you think of Facebook and what you think Facebook controlling VR, AR, the metaverse, etc etc might mean–and if that was a worthy cost instead of waiting another 5 to 10 years (again, assuming it even works). Nor should one blame others for making more modest or “more enthusiast” investments–there really is such a thing as being “too soon” and Facebook is the outlier here taking a massive risk (because they have to if they want a shot at controlling the next medium) while most everyone else is wondering if maybe it’s just too early to go mass market.