Editor’s note: we have decided that, while restaurants remain open, we will continue to review them

There are certain food items that make everything better. A well-made pie is one of them. The Windmill, a pub in London’s Mayfair, now serves very well-made pies. In the days following my dinner there, I kept thumbing open the photograph on my phone and gazing upon their steak and kidney pie, with its glazed suet pastry case, lightly crimped around the edges. It looked like a promise, fully kept.

There was a time, many centuries ago, when pastry was used only as a lid on stews, or as a case to protect cuts of meat from the flames in the hearth. It would be discarded or fed to the pigs or, if the big house was conscious of its obligations, given to the poor. By the late medieval era we were putting fats into pastry and making it distinctly edible. Follow that golden thread all the way through history to this brilliant piece of steak and kidney loveliness. Which I didn’t order. Think about that for a moment. Faced by an extensive pie menu – not just steak and kidney but venison and mushroom, chicken, bacon and leek and so on – I chose something else. I allowed my companion, who had just celebrated a significant birthday, to have the pie. I am a very kind man. Also, I felt I had a responsibility to try other things on the menu. But you know what I really wanted. 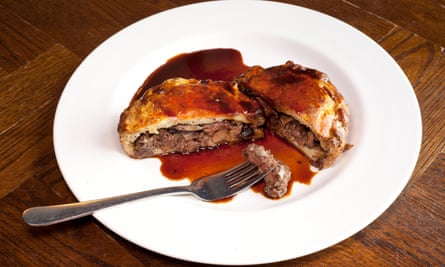 The Windmill, in a narrow lane just off Regent Street in London, is a 19th-century pub that has recently been colonised. It has been taken over by the team who run the Guinea Grill, four minutes’ walk away on Bruton Place. The Guinea is one of those London landmarks, a tight knot of rooms in which good steaks are eaten and big bottles of Bordeaux are drunk. It is famed for its mixed grill and, of course, its pies. I can’t pretend I like all the other clientele. It attracts a certain hooting, stomping, testicular crowd, many from the hedge-fund offices around here; the sort who encourage me to refine my plans for a policy of involuntary euthanasia to put us out of their misery when I become prime minister. But that’s not the Guinea’s fault.

In 2016, Young’s installed the revered publican Oisín Rogers at the Guinea. He’s a man with the cheery looks of a children’s television presenter and the unflinching, steely room command of Bet Lynch of the Rovers in her pomp. He spruced up the menu, introducing a magnificent cooked breakfast, and cheered up the service. Now he’s been given dominion over the Windmill, also a Young’s pub. Nathan Richardson, the Guinea’s head chef, has come over, along with a number of other staff. As a result, it feels like an outcrop of the mothership. Vladimir, the broad-chested sommelier from the Guinea, is working the tables the night we go, offering a lengthy wine list that frankly looks absurd for a humble London pub. It transpires that this is essentially the Guinea’s list. “If someone orders something from the list, I go round the corner and get it,” he says. Thus, if you want to drink a 2005 Château Latour at £2,450 with your steak and kidney pie, you may. If that’s not your thing, there are lots of other less worryingly priced bottles. 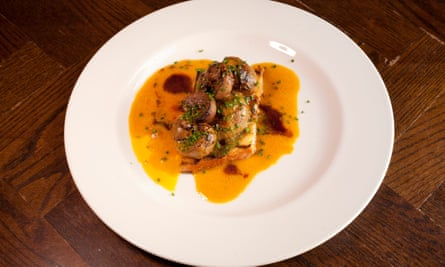 Downstairs is the pub bar with its own menu of devilled kidneys on toast, sausage rolls and fish fingers. There’s also that pie selection, which is more extensive than that at the Guinea and includes both a shepherd’s and a fish pie, and filo-wrapped option filled with pumpkin, chestnuts and mushroom. The upstairs dining room, with its green-blue walls and thick tablecloths, has a fancier menu, but you can order from both.

Up here it starts with snacks for between £2.25 and £4.50: bouncy roasted chicken hearts with a sticky glaze on wooden skewers; straws of still-warm baked pastry brushed with a meaty reduction with a hilariously rich bone marrow mayo to help them along; a bowl of white crab meat with diced egg and toasted brioche; squares of cured lamb topped with a silvery curl of vinegared anchovy. You could order all of these as a starter. Or you could pretend they’re a British equivalent to cicchetti and order them alongside the starters. 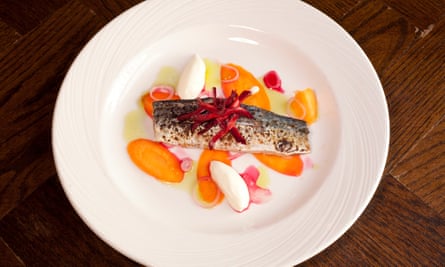 From the menu downstairs we have pert devilled kidneys served in a kicking sauce with a slow-release cayenne punch that soaks magnificently into the toast; from the menu upstairs comes a warm fillet of soused mackerel with a dollop of sour cream, and discs of crunchy carrot, all of it with a pickle that remains the right side of teeth-baring.

And then that pie, with a pastry shell that cracks to reveal that it has been properly filled with solid lumps of braised beef and kidney in a gravy as deep as any James Joyce novel. My companion kindly scoops a corner of it on to my plate and I sigh. At the Guinea these pies come with a frilly paper collar. Mind you, at the Guinea they cost £18 and here it’s £14. You choose. I have the beef fore rib, which arrives carnation-bloom pink and neatly sliced, with a brioche crumb and more of that bone marrow mayo. It’s a grand piece of meat treated with care. And, yes of course, we have vegetables. There are peas. With pieces of bacon. Some of you will now be ranting about meat consumption and an unbalanced diet. Maybe I shouldn’t tell you the chips are cooked in beef dripping. Mind you, they’re the one failure. Those chips needed a longer bath in the melted animal fats. Does it help if I tell you that, after this, I needed to go back to the gym? Repeatedly? No, thought not. 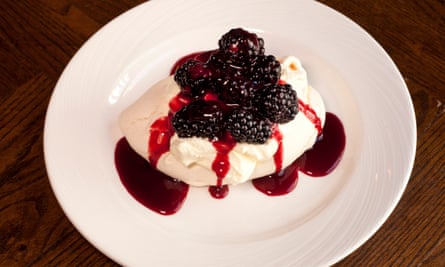 We finish with a sturdy treacle tart and some cracking meringues with blackberries. As in they cracked under the spoon to give way to the lusted-after chewiness beneath. We ate the night before the 10pm curfew was introduced and the sense of frustration among the staff was palpable. Young’s have launched an impressive app that enables you to book, order and pay without human interaction. Tables are spaced and the one-way system is in place. They’ve done everything they needed to do and like so many others have had to contend with the hollowing out of trade in the centre of town. If you feel comfortable with a night out, show the Windmill some love. You’ll be rewarded with terrific pie.

News from Manchester where Eat Well MCR, led by chef Mary-Ellen McTague among others, has been working since the start of the pandemic to provide meals for people in the city who need support. To raise funds, they have just launched the Eat Well MCR Marketplace, an online delivery service not just of meal kits from the likes of Elite Bistros and Baraxturi, but also pantry items, booze, fresh pastas, and meat and veg boxes from farms within 25 miles of the city. Check out the full offering at shop.eatwellmcr.org

Meanwhile, elsewhere in the city a team with experience at Simon Rogan’s Fera and Stockport’s Where the Light Gets In, has taken over the restaurant space at the Ducie Street Warehouse just around the corner from Manchester Piccadilly station. On Fridays and Saturdays throughout October the venture, entitled Higher Ground, will serve a five-course tasting menu spotlighting produce from the North West, at £45 a head. To book visit exploretock.com

Opposition to the 10pm curfew for restaurants and pubs is gathering pace, with both London mayor Sadiq Khan and Manchester mayor Andy Burnham calling for a review, siting crowds picking up alcohol supplies from supermarkets as the pubs close. On social media the campaign has codified around the hashtag #cancelthecurfew, and one operator, Jeremy Joseph of nightclub G-A-Y, has instructed lawyers to challenge the early closure rule in the courts.

Jay Rayner’s My Last Supper, One Meal a Lifetime in the Making, is published in paperback by Guardian Faber now. Buy it for £7.99 at guardianbookshop.com