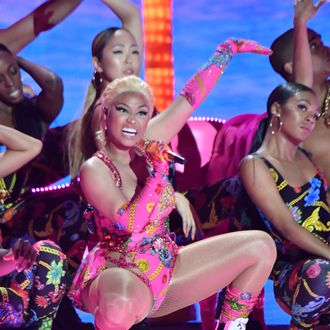 Imagine having a baby and dropping a sick guest verse in the span of two weeks? Only a true Queen could pull that off. At midnight on Friday, October 16, new mother Nicki Minaj was featured on the remix of Sada Baby’s, “Whole Lotta Choppas” just two weeks after giving birth to her first child. Minaj starts out her verse by announcing the good news, “It’s the Queen Sleaze / Nine months motherf*ckin’ pregnant, like what.” Mrs. Petty goes on to spit for 2 minutes straight on the track, repeating Sada Baby’s chorus which went mega viral on Tik Tok past summer. Less than 24 hours ago, Minaj announced the gender of her baby on Instagram, revealing that she had given birth to a baby boy via a lovely handwritten note from Queen Bey herself. In the song, Minaj shared that she’s already got playdates lined up for her newborn son with progeny from other A-list artists like Drake. “Uh, he a freak like Giannis (Giannis) / To be honest, I hope one day we do a play-date with Adonis,” raps Minaj. Calling it now, Adonis and Nicki’s son will collab and land on top of the hip-hop charts in 2040.