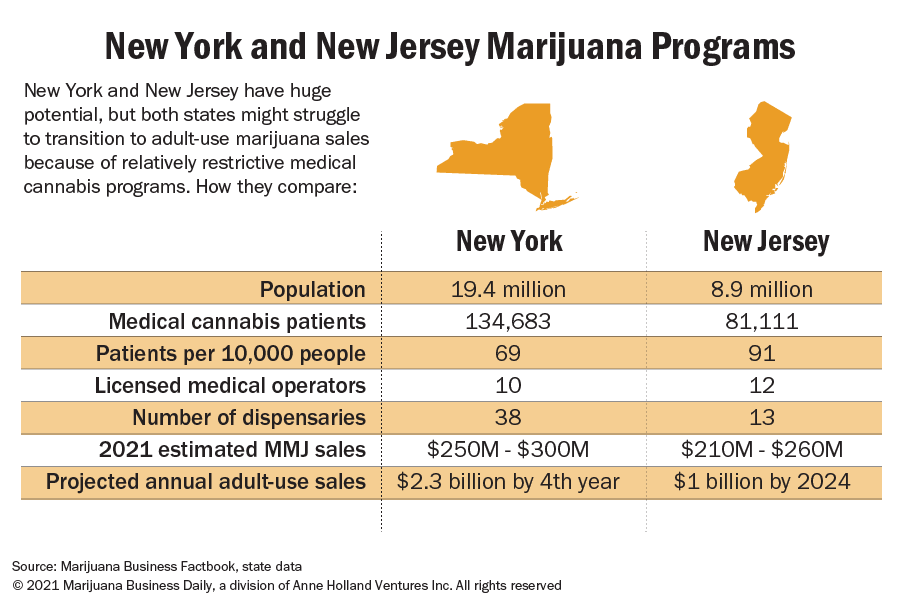 Facing massive budget woes and legalization in neighboring New Jersey, politicians in New York are set to take another crack at legalizing a recreational marijuana market that could generate more than $2 billion in sales – and this time, the odds look better.

Gov. Andrew Cuomo renewed the pledge last week to legalize recreational marijuana amid growing financial and regional pressures to do so.

Efforts in recent years have failed – a 2020 bid was cut short by the coronavirus pandemic.

“We will legalize adult-use recreational cannabis, joining 15 states that have already done so,” Cuomo tweeted Monday.

“This will raise revenue and end the failed prohibition of this product that has left so many communities of color over-policed and over-incarcerated.”

Marijuana Business Daily projects that a New York adult-use market eventually would become the largest on the East Coast, generating $2.3 billion in annual sales by its fourth year.

New Jersey’s adult-use market, by contrast, is expected to reach nearly $1 billion in annual sales by 2024.

Legalization in New York would create tens of thousands of new jobs and also would provide huge opportunities for ancillary companies, such as cultivation- and processing-equipment makers, packaging companies, attorneys and marketing specialists.

PharmaCann has one of the 10 vertical medical cannabis licenses in New York.

“The governor’s messaging seems to be fairly resolute, and we know there’s an appetite in the legislature. As always, the devil is in the details,” Unruh said.

Industry officials cite the following factors as reasons they believe it will get done in this year’s Legislature, either through a stand-alone bill or through Cuomo’s budget bill this spring:

“New Jersey will have this wave of customers coming from New York, and that’s just New York losing tax dollars that they can’t afford to lose.”

Unruh said the biggest hitch could be over how the adult-use tax revenues should be spent.

Social equity advocates want tax money to be earmarked for economic development and other programs in communities that were affected by the war on drugs, while Cuomo has wanted revenues to go into the general budget.

New York’s renewed effort to legalize – a Senate bill already has been refiled – arguably puts the state back in a race with New Jersey to be the first to launch recreational marijuana sales.

The race could become close if New Jersey continues to struggle to move forward on legislation and regulations.

Those differences are expected to get resolved.

But Vivien Azer, an analyst with New York investment banking firm Cowen, wrote Monday that the market launch could be delayed up to six months beyond her previous estimate of July 1.

DiPisa noted that while New Jersey is further along than New York, “they certainly have New York looking to nip at their heels.”

New York’s 10 MMJ licensees – nine are multistate operators – want to be able to fast-track into adult use.

“I think it’s important for New York to recognize that the states that have made the most successful transition to adult-use are those that best leverage existing medical marijuana operators out of the gate,” Unruh said.

Ngiste Abebe, president of the New York Medical Cannabis Industry Association and director of public policy for marijuana company Columbia Care, agreed: “We would like to be thoughtfully included in adult use. We’ve already invested in the infrastructure.”

Abebe stressed that the MMJ industry association also wants to support the state’s social equity goals, which could mean fast-tracking some of those applicants as well.

Cuomo said in his news release last week that he wants an equitable licensing structure, one that offers “licensing opportunities and assistance to entrepreneurs in communities of color who have been disproportionately impacted by the war on drugs.”

Cuomo’s administration is expected to release more details in the coming weeks, but DiPisa said the licensing opportunities could be similar to New Jersey’s.

Lawmakers in New Jersey passed an implementation bill that is designed to offer licensing opportunities for operators of microbusinesses.

Priority consideration for licenses will be given to minorities, women and disabled veterans as well as applicants who reside in “impact zones,” or areas affected by high jobless rates, poverty or past marijuana enforcement activity.

Abebe said she hopes “New York decides to really make history in bringing forth” strong social equity provisions and that the state can draw from examples in other markets, such as revolving-loan funds for applicants.

She said two key issues entrepreneurs face are the struggle to access capital and technical support. She noted that a number of multistate operators are active in other states in providing technical support and/or running incubation programs.

One of the big issues is whether New York is prepared to transition to adult use, even if medical cannabis operators are allowed to fast-track to recreational marijuana.

New York has a highly restrictive MMJ market, with limited qualifying patient conditions and a ban on flower. The 10 operators are allowed to open only four dispensaries each.

Industry officials are advocating for legalizing flower sales, letting physicians use their discretion in recommending MMJ and expanding the number of dispensaries allowed.

“The expansion of the medical program is going to be vital to the success of the adult-use program in New York,” DiPisa said, in meeting pent-up demand and curbing illicit sales.

Jeff Smith can be reached at [email protected]