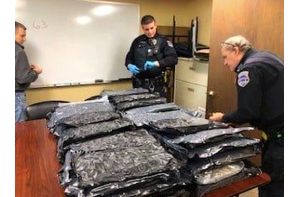 Did the original owners forget something?

A Pennsylvania man who bought the contents of a storage shed sight-unseen on the morning of Jan. 27 got quite an eyeful when he opened it up a few hours later and found about US$315,000 ($403,200) worth of cannabis.

Suspecting drug activity, the Honest Abe of the storage world reported the find to the Eastern Adams Regional Police (EARP). The police responded to the Hilltop Self Storage and met the complainant, notes a Facebook post from EARP.

The man told police he was preparing to clean out the contents of the locker that he had purchased at auction when the previous renter had not paid his bill. According to FOX23, police noted that the buyer received the contents of the shed for US$126 ($161), which included a US$16 buyer’s fee.

Before he began cleaning, the man saw a large plastic toolbox on the floor, EARP reports. He removed the lid and saw that the box was filled with vacuum-sealed bags, each about 30 by 45 centimetres, of what looked like cannabis.

A police field test showed the hefty haul — which included 63 bags, each filled with about 18 ounces (510 grams) of cannabis — was estimated to have an approximate street value of US$315,000 ($403,200). The container was loaded on a pick-up truck and transported back to EARP to be logged into evidence.

The officers received the address of the previous renter from a storage business employee. Andreas Garcia-Grajeda, 31, was later taken into custody without incident and transported to Adams County Prison for processing.

Told by police about the discovery in the locker, it is alleged that Garcia-Garjeda said to the officers: “Oh, man, I wanted to get that out of there,” FOX23 reports.