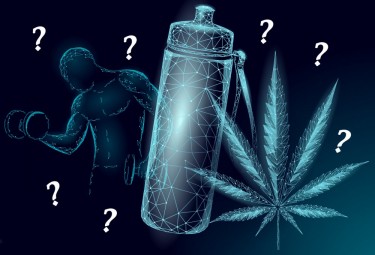 Getting the “munchies” is one of the most common effects of being stoned.

So common, in fact, that even entire movies have been dedicated to it. Harold and Kumar Go To White Castle, anyone? This is also why the junk food industry has benefited so much from the rise of cannabis legalization, and why people associate fast food, pizza, and other delicious comfort food with getting stoned.

But if that’s the case, why are pot smokers skinnier and healthier than the rest of the population?

A 2103 study has revealed that regular cannabis smokers are actually skinnier than everyone else. For the study, researchers analyzed data from over 4,500 adult Americans; 579 of them are current cannabis users or people who have smoked within the last month. Out of the respondents, 2,000 of them consumed cannabis in the past and 2,000 never had it before. The participants were also given various tests to identify health markers including fasting insulin, glucose levels, cholesterol levels, insulin resistance, and waist circumference.

The findings were interesting: they showed that current cannabis users had a much healthier insulin response compared to average people. Additionally, the insulin levels of recent cannabis consumers were lower, and they also had improved insulin resistance scores; they even had smaller waists and more good cholesterol levels. This means that they were less likely to become obese, had lower risk for heart disease, reduced risk for insulin resistance, and were also less likely to develop diabetes.

The authors aren’t exactly sure why the results are such, but the findings do point towards the fact that cannabis works somehow to help people manage their insulin better. In turn, this leads to a reduction in body weight, and it also helps explain why cannabis users tend to have a lower chance of contracting diabetes.

Another 2018 study found that when researchers assessed the relationship between body mass index (BMI) and cannabis consumption, pot smokers tend to have a lower BMI compared to people who don’t smoke weed.

Then there’s another 2019 study showing the same results when compared to people who abstain from cannabis. “We found that users, even those who just started, were more likely to be at a normal, healthier weight and stay at that weight,” explains the study’s co-author Dr. Omayma Alshaarawy. “Only 15 percent of persistent users were considered obese compared to 20 percent of non-users.” Again, they were still unable to find data explaining why cannabis was associated with lower BMI but they do have theories suggesting that cannabis use leads to changes within your body’s cells that prevent unhealthy weight gain.

What Could Be The Reasons Behind It?

One can hypothesize many reasons why cannabis users tend to be skinnier and healthier in the long run. For one thing, perhaps people that smoke cannabis turn to pot instead of unhealthy eating or drinking habits to cope with everyday stress and anxiety. Because they are already users, they know that smoking can provide them with the stress and anxiety relief that food and alcohol can’t beat.

There could also be the possibility that there are components in cannabis such as CBD that combat the munchies-inducing effects of THC, in the same way that it negates its paranoid-inducing characteristics in most people. There is still much we don’t know about how THC and CBD act with one another, since THC is a known appetite stimulant yet CBD has shown to suppress appetite in some animal studies.

There’s also the possibility that cannabis use is making some people more active; that’s why it isn’t surprising to see many athletes using cannabis because when it’s consumed properly and in the right doses, it can encourage you to exercise while feeling less pain from muscle strain. Furthermore, people who used to have mobility, joint, or muscle issues do find relief from cannabis, thus helping them shed more weight efficiently.

It’s a known fact too, that poor sleep contributes to weight gain. However, cannabis can help treat insomnia while enabling you to be more relaxed, so that you can consistently have a better night’s sleep. And if you already are suffering from pain and stress, then cannabis is hitting two stones in one while helping you to lose weight. So while cannabis per se may not actually cause weight loss, it does help with the other factors that contribute to significant weight gain as well as associated health problems.

After all, using cannabis helps regulate the endocannabinoid system, which helps ensure that vital functions including a healthy appetite and metabolism, sleep, and stress are managed efficiently by the body while helping fight off infection. The THC and CBD content in cannabis do stimulate the various receptors in the endocannabinoid system, producing all these wide ranging positive effects.

Even if consuming cannabis will cause your appetite to spike in the short term, there’s certainly evidence that it helps your body manage the food once it’s in the body. Researchers find that this effect lasts a long time even if you stop using cannabis, so even if you smoke pot on an occasional basis you can still enjoy these positive effects on your health and waist line.

So here’s the main takeaway: there is no one-size, fits-all solution for immediate weight loss. Having said that, cannabis can be a vital tool in your weight-loss tool kit coupled with regulated sleep, a healthy diet, and a good fitness regimen. But even if you consume pot for recreational or medical purposes, it does not necessarily make you fat. Just think about these factors the next time you want to reach for cheese puffs when you toke up.

CAN CANNABIS HELP YOU LOSE WEIGHT, READ THIS… 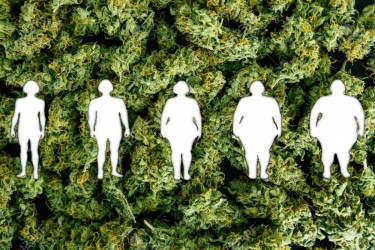 WHAT MARIJUANA STRAINS CAN HELP YOU LOSE WEIGHT? 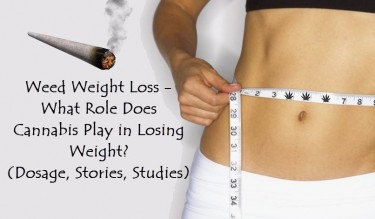 WEED WEIGHT LOSS STUDIES AND TIPS, HOW DO YOU GET STARTED?